As the name indicates, the Black Caiman is a dark color. This can range from a very dark gray and cover various shades of black. It is a scary looking creature to many people and is often coined as evil due to the red eyes. They skin is covered with thick scales. This is one of the largest reptiles as the males can be about 17-20 feet in length.

The Black Caiman is able to live around lakes and streams. However, they need to be bodies of water that are slow moving. They are often found in the Amazon basin during the rainy season. They are found throughout South America but only in bodies of freshwater.

This animal is one that is very patient when it comes to hunting for prey. They are very intelligent animals with a radar that helps them to find water. This is important because it they are in a basin that will dry out after the rain has been there for some time they need to be able to venture on to another place. Then they will return to the basin again the following rainy season.

Fish make up the largest portion of the diet for the Black Caiman. The types of fish will vary based on location. However, catfish seem to be the one that is the most common. They also consume birds and turtles. They are also known to take down large mammals including piranhas and capybaras.

They hold their prey under the water until it drowns and then rip off large pieces of it. While there are stories about them heavily hunting humans, it is fiction. They will attack them if they get too close and the animal fears for its own protection though. 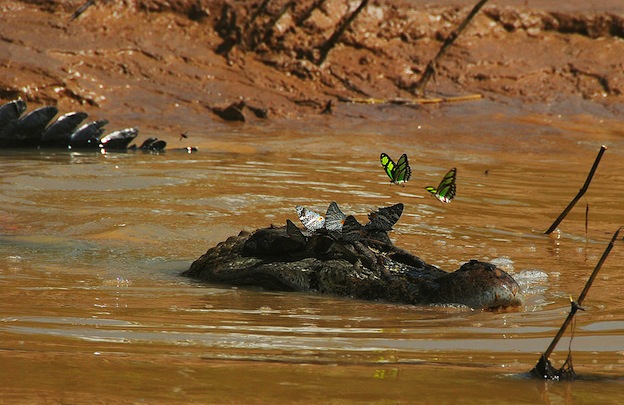 Mating occurs in September and early December. The females will diligently build a nest on land for her eggs. This can be from 30 to 60 eggs that they will deposit there. Those eggs will hatch from 45 to 90 days. They are great at helping the young from the eggs and into the water. They will stay with their mother for several months before venturing off.

Even though she will deposit a large number of eggs, more than half of them will die within the first few days of life. Less than 2% of them will make it to maturity. This is one of the reasons why it is hard to get their numbers back up. The other is that they don’t mate annually. Instead, it can be only every 2 or 3 years.

While they have no natural predators, at one point the Black Caiman was almost extinct due to excessive hunting. In many areas they were once a primary source of meat. In poor village areas poaching for this purpose continues to be a huge problem. The use of their skins to make leather though is the primary reason why they have been hunted.

Conservation efforts have helped it to be moved down the status of conservation dependent. Most of these efforts involve protecting the natural environment of these animals. Keeping the areas available to them as well as free from pollution is very important.

Today it is not known exactly how many are in the nature. As a result of it the cost of their skin has increased. In fact, it can bring large amount of money. This is definitely an incentive for poachers to go after those that remain. To increase the population there are efforts involving mating them in captivity. Then a large number of the offspring can survive to maturity.