Crocodiles may not seem like the most exciting animals out there, but you can still learn a lot about them. These animals have been around for more than 200 million years. They continue to have a prehistoric look to them. It is amazing to experts that they didn’t end up extinct about 65 million years ago when the dinosaurs did. They also haven’t been affected by evolution and look very much today like they did all those years ago.

Crocodiles have one of the most complex structures and anatomy of any animals out there. They have a four chambered heart as well as a cerebral cortex.

They are excellent swimmers and will tuck their feet under their bodies when doing so. This process reduces the amount of resistance they experience from the water. As a result they are able to swim faster. They also have webbed feet.

They do have tongues but most people don’t know that. They have a body structure that prevents them from being able to stick it out as humans and most other animals are able to.

The most powerful bite of any animal comes from the crocodile. They can be transported with their jaws bound shut with large rubber pieces of tubing that are used for vehicles. 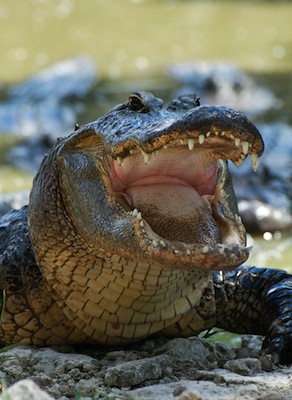 The crocodile is well known for eating just about anything it can sink its teeth into – fish, crustaceans, mammals, and even other reptiles. However, they won’t consume a type of bird called the Egyptian Plover. Experts have carefully observed this to understand it. What they have found is that this bird will enter the mouth of the crocodile and consume the various forms of parasites that live there. Then it will fly away and the crocodile will go about its business.

Crocodiles do swallow rocks but not because they are dumb or don’t know that they aren’t food. This process actually helps their bodies to digest the foods they do consume much easier.

Experts have credible proof to show that crocodiles are closely related to some species of birds and some types of dinosaurs.

The sex of the offspring is determined by the temperature rather than be genetic chromosomes.

Crocodiles can make some types of sounds when they are in distress. Most of the time though they are quiet.

They have ears and they have excellent hearing.

It is a myth that crocodiles have a craving for human flesh and blood.

The fastest a crocodile has been recorded on land is 11 miles per hour.

They release heat through their mouths as they don’t have any sweat glands.

It is hard to know how old crocodiles are. However, it is believed they can be more up to 100 years old.

The hides from crocodiles are often used to create an array of products. This includes wallets, purses, belts, hats, and shoes. This is why hunting crocs is so common – the hides can be sold for quite a profit.

In some countries the consumption of crocodile meat is common. It may be done out of necessity by some villages. However, in other areas it is considered to be a delicacy.

Crocodile oil can be used as a natural way to heal up the skin when it is chapped or dry.

The best way to tell crocodiles from alligators is the shape of their snout. They are very long and tapered for a croc while being very broad on the alligator.