There are 23 different crocodile species that have been identified. They are found all over the world – in both salt water and fresh water. If you have a passion for crocodiles it can be fun to explore the different species one by one. Here are some basics about several of the species for you to get started with.

They belong to the family known as crocodilia. This includes alligators too. However, there are plenty of differences. Even so the crocodile is often mistaken for the alligator. They are found in many of the same regions so if you don’t know what to look for you can easily end up mistaking them.

Crocodiles are well known for their ability to swim very quickly in the water. They can move about 20 miles per hours when they need to. The fact that they can breath underwater makes it very simple for them to be submerged most of the time. They find this to be the best way to grab their prey and to take them down without being detected.

They can take down very small prey or extremely large mammals. The smaller crocodiles consume insects, frogs, and small birds. As they get larger they will move on to rodents, deer, cattle, sheep, and even wildebeest and water buffalos. It is amazing what they are able to eat due to the strength of their jaws and teeth.

They have also been known to eat humans but only on rare occasions. It isn’t believed that they hunt for humans but that they will consume them if they are hungry enough and they are in the same area. They rarely are on the hunt for food but instead just wait for it to show up. Since they are by the water they get plenty of access to animals that come along to get a drink.

Crocodiles don’t move very quickly at all on land. They have short appendages and this process can drain them of their energy. They do go to land though to soak up the sun and to lay their eggs. The females can lay up to 100 eggs depending on the species. What is interesting is that the sex won’t be determined until later on. Rather than the chromosomes determining it, the temperatures of the eggs does. The warmer they are they more likely they will be male. 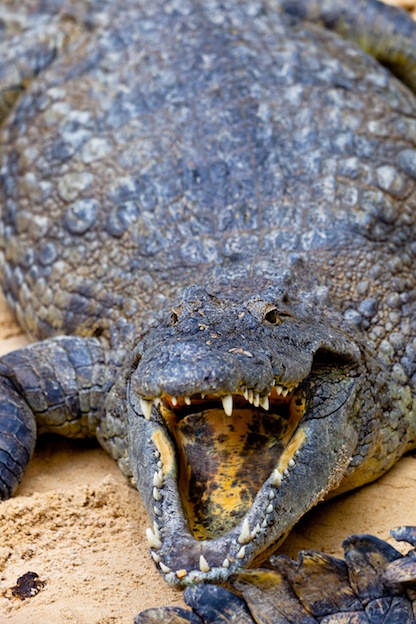 Today you will find that many of the crocodile species are thriving. They are doing well in the wild in spite of human interruptions. Others though are at risk of extinction due to their habitat being taken away. That combined with heavy hunting is significantly reducing their populations. The Cuban Crocodile is one that is at the highest risk right now.

The skin of crocodile species is very textured and scaly. This protects them from the hot sunlight. It is also a primary reason why they are heavily hunted. The use of this skin to make belts, clothing, and even purses is very common. Others are hunted due to the sport being fun for some people. Of course the fear that many people have when it comes to these animals also results in the destruction of them.

There are plenty of crocodile farms out there though where people pay to go see these animals. They don’t feel the same type of fear as when they see them in the wild. At the same time it helps to fulfill their desire to see them in real life. Crocodiles do very well in captivity. Regardless of where they live the lifespan can be from 70 to 100 years.